Nothing Bad Comes From God

[4:80] Whoever obeys the messenger is obeying GOD. As for those who turn away, we did not send you as their guardian.
[4:81] They pledge obedience, but as soon as they leave you, some of them harbor intentions contrary to what they say. GOD records their innermost intentions. You shall disregard them, and put your trust in GOD. GOD suffices as an advocate.

[29:51] Is it not enough of a miracle* that we sent down to you this book, being recited to them? This is indeed a mercy and a reminder for people who believe.
[29:52] Say, “GOD suffices as a witness between me and you. He knows everything in the heavens and the earth. Surely, those who believe in falsehood and disbelieve in GOD are the real losers.”

When the devil wanted to test Job he had to ask God for permission.

“God does not punish the mathematician who fails to obtain the right answer to his problem. The thought of the unsolved problem does punish him, until he applies the right principle and thus secures the desired result.” – Science of Mind p. 53

[3:108] These are GOD’s revelations; we recite them to you, truthfully. GOD does not wish any hardship for the people.

[42:30] Anything bad that happens to you is a consequence of your own deeds, and He overlooks many (of your sins).

[16:33] Are they waiting for the angels to come to them, or until your Lord’s judgment comes to pass? Those before them did the same thing. GOD is not the One who wronged them; they are the ones who wronged their own souls.

Something’s that appear to be “bad” are actually for our good. For example if people saw the cross sections of the life of Joseph they may have thought that he was outside of God’s grace and miss the bigger picture that he was being blessed.

Even when we sin God allows us to experience the consequence to God willing correct us.

Proverbs 12:1
The person who loves correction loves knowledge, but anyone who hates a rebuke is stupid. 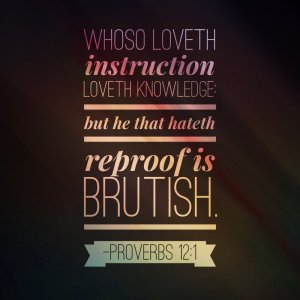