The Birth of John
[3:38] That is when Zachariah implored his Lord: “My Lord, grant me such a good child; You are the Hearer of the prayers.”
[3:39] The angels called him when he was praying in the sanctuary: “GOD gives you good news of John; a believer in the word of GOD, honorable, moral, and a righteous prophet.”
[3:40] He said, “How can I have a boy, when I am so old, and my wife is sterile?” He said, “GOD does whatever He wills.”
[3:41] He said, “My Lord, give me a sign.” He said, “Your sign is that you will not speak to the people for three days, except through signals. Commemorate your Lord frequently; and meditate night and day.”

Verse 3:38 shows Zachariah’s humbleness that despite his old age he learns from Mary who was a child. Wisdom is granted only by God, and it is given to whomever He chooses.

Even though Zachariah prayed to God for a child when God answers his prayer he didn’t believe it. This shows that we should pray big prayers because God will still surprise us. Even though that God told him that he will have a son, he still requested a sign.

Was Zachariah not able to speak or did he choose to not speak?

Luke 1:11 – 23
11 Then an angel of the Lord appeared to him, standing at the right side of the altar of incense. 12 When Zechariah saw him, he was startled and was gripped with fear. 13 But the angel said to him: “Do not be afraid, Zechariah; your prayer has been heard. Your wife Elizabeth will bear you a son, and you are to call him John. 14 He will be a joy and delight to you, and many will rejoice because of his birth, 15 for he will be great in the sight of the Lord. He is never to take wine or other fermented drink, and he will be filled with the Holy Spirit even before he is born. 16 He will bring back many of the people of Israel to the Lord their God. 17 And he will go on before the Lord, in the spirit and power of Elijah, to turn the hearts of the parents to their children and the disobedient to the wisdom of the righteous—to make ready a people prepared for the Lord.” 18 Zechariah asked the angel, “How can I be sure of this? I am an old man and my wife is well along in years.” 19 The angel said to him, “I am Gabriel. I stand in the presence of God, and I have been sent to speak to you and to tell you this good news. 20 And now you will be silent and not able to speak until the day this happens, because you did not believe my words, which will come true at their appointed time.” 21 Meanwhile, the people were waiting for Zechariah and wondering why he stayed so long in the temple. 22 When he came out, he could not speak to them. They realized he had seen a vision in the temple, for he kept making signs to them but remained unable to speak. 23 When his time of service was completed, he returned home. 24 After this his wife Elizabeth became pregnant and for five months remained in seclusion. 25 “The Lord has done this for me,” she said. “In these days he has shown his favor and taken away my disgrace among the people.”

Compare Zachariah not speaking to Mary not speaking. Zachariah could not speak, but Mary made a vow not to speak. God used the word “will” for Zachariah and not shall, therefore it was not a choice. Looks like Zachariah was in awe from the miracle that God bestowed upon him that he was speechless, and could only commemorate God.

By not speaking it made the matter easy for them, because no one would have believed either person.

Zachariah:
[19:10] He said, “My Lord, give me a sign.” He said, “Your sign is that you will not speak to the people for three consecutive nights.”

God can also cause anything to speak, like how God caused Jesus to speak from the crib. 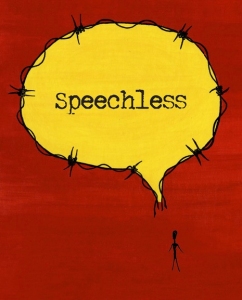